We won the IRI talent show!

You may be wondering, "What's IRI?" Well, IRI, the Indiana Robotics invitational, is one of the toughest tournaments out there. It's an off season tournament where only around 80 teams are selected to compete. As you might have guessed, that means it's kinda hard to get in. We had a great time competing with fabulous teams from around the States, Canada, and Mexico.  We ranked 33rd of 68, and best of all, won the IRI talent show.  We also enjoyed the Indiana corn on the cob.

That ONE Team hosts a robotics and science summer camp each summer!  We also hosted a Robotics Open House last May and hope to continue to do this each spring. Help support our team's local alumni! Go to roboteergear.club or scan the QR Code and check out their awesome gear. 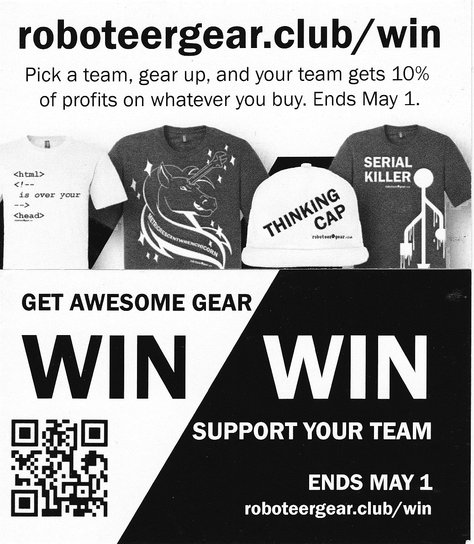 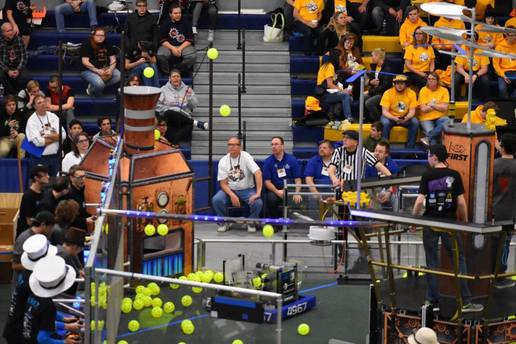 We have completed our tournament season, and here are the results.

For more detailed rankings including all of the teams we competed with at these events, check out The Blue Alliance with the button below and search for the tournament you want more info on.
Click here to go to The Blue Alliance
This isn't the last you'll see of us on the FIRST STEAMWORKS field, we are gearing up for the off season! Keep your eyes out for more information on off season tournaments coming soon!

The season may be over, but we need funds for next year's season. We are still looking for donations, so if you are willing we would greatly appreciate it, just click the button below.
DONATE HERE

That ONE Team - Our Next Engineers

That ONE Team is a FIRST® Robotics team located in Plainfield Township, Michigan. We are a team made up of high school students from Rockford, Northview, and quite a number of home schooled students from the community. We are entirely self funded, except for the generous donations we get from our sponsors.

What is FIRST® you might ask? FIRST® Robotics is a program founded by ground breaking engineer Dean Kamen (Inventor of the Segway, Slingshot water filtration system, and he helped design the Coca-Cola Freestyle soft drink fountain, and that's just naming a few) to get students involved in the field of science and technology. FIRST® gives us a challenge in the beginning of January and we have six weeks to build a robot to overcome the challenge. After the six intense weeks of build season comes what we call competition season, where teams from around the world compete in a tournament style competition to show their solution to the challenge. Teams receive awards at the end of the competition based on not only performance, but also things like how well they worked with the other teams, how well they designed their robot, and even how much spirit their team showed over the course of the event. The most prestigious award a team can get at an event is the Chairman's award. The Chairman's award is given to the team who best represents what a model FIRST® Robotics team should be.

We started out strong in 2014. We won the Rookie All-Star award at the Michigan state championships, the highest award a rookie team can receive. In 2015, we received the Chairman's award. In both of our years of competing, we made it to the FIRST® world championships, where teams from all over the world come and compete in one final competition to see which three teams have found the best solution to the challenge.

That ONE Team's mission is to inspire students to learn about science and technology in a fun and challenging environment that focuses on teamwork, excellence and Gracious Professionalism. Our team lives out integrity and encourages community engagement in order to help build the innovators and leaders of tomorrow.

Gracious Professionalism is a way of doing things that encourages high quality work, emphasizes the value of others, and respects individuals and the community.

Our team gives back to the community by teaching students STEM (Science Technology Engineering and Math), mentoring other teams, and helping the community with various water based service projects. We've participated in the Rogue and Grand river cleanups, stream insect monitoring, and we've passed out fliers promoting a hazardous waste dump to keep the waste out of our water. We're currently developing plans for a community garden.