Overview of our 2014 season Aerial Assist.

Returning from the Gull Lake Tournament, we are excited to announce that our team was the team captain of the winning alliance, we won Highest Rookie Seed, and we won Rookie All Star Award! We had a blast, and even made friends with another rookie team, White Lake Robotics, team 4956, and invited them to come to our build space!

From there we went to the West Michigan Robotics Tournament, and won the Rookie Inspiration Award and Highest Rookie Seed, and enough points to qualify for the Michigan State Tournament!

The State Tournament was really fun, and lots of hard work.  We destroyed a drive transmission, and replaced it over lunch, barley making it to our next match.  We finished the tournament in 17th place overall, won Highest Rookie Seed and the Michigan State Rookie All Star Award, and qualified for the World Tournament in St. Louis, Missouri.

Worlds was a blast!  It is so fun meeting teams from all over, seeing all the different robots & pits, and playing in the dome!
We finished 16th in our division of 100 top teams, and won the Highest Rookie Seed and Rookie Inspiration Award! 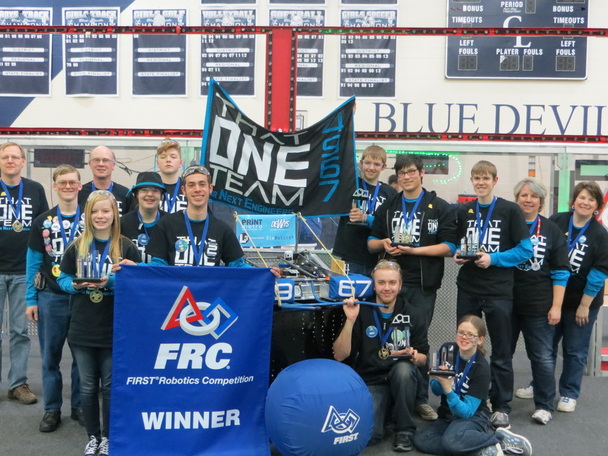